Dr. David Hogan has devoted his career to improving health care and quality of life for older Albertans. He has gained a well-deserved reputation as an engaged and compassionate clinician who exhibits professionalism and compassion toward his patients, their families and their caregivers. He is a national leader in geriatric medicine, and he has contributed enormously to our understanding of aging. In particular, he is sought out provincially and nationally for his expertise in dementia and geriatric syndromes. 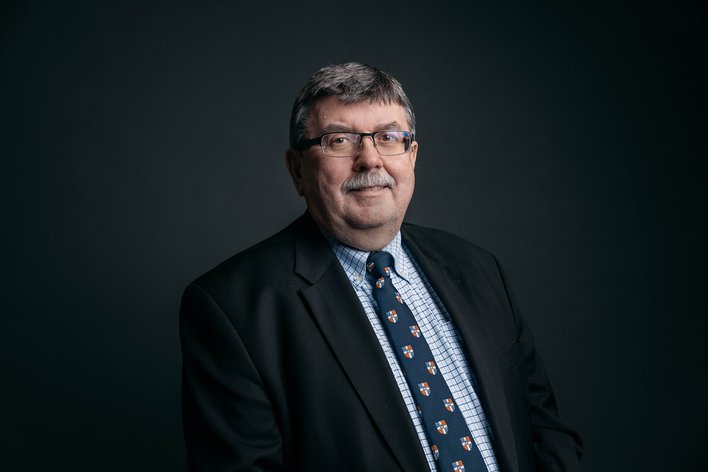 He has played a leadership role in the Canadian Consortium on Neurodegeneration in Aging (CCNA), directing its training and capacity-building program and acting as an inaugural member of CCNA’s Research Executive Committee. The CCNA has become the premier national research hub in neurodegenerative diseases and between 2019 and 2024 will receive $44 million in funding from the Canadian Institutes of Health Research (CIHR) and 11 other partners. He is currently the Calgary site Principal Investigator for the Canadian Longitudinal

Study on Aging (CLSA), a national prospective cohort study that will follow approximately 50,000 Canadians who were between the ages of 45 and 85 when recruited for 20 years. Information on their biological, medical, psychological, social, lifestyle and economic characteristics will be collected to better understand how we can all age better. Through his frequently cited research, his effective teaching, supervision, and mentorship, and his own work as a compassionate clinician, he has contributed enormously to caring for the aging population in Alberta and across the country.

Among his many awards for his clinical and research contributions to improving the care provided to older adults are the Foothills Medical Staff Association Service Recognition Award, the Alzheimer Society of Calgary Jeanne Bentley Award for Community Spirit, the AMA Long-Service Award and the RCPSC RAC 1 Prix d’excellence. More recently, he was a co-recipient of Alberta Health Services President’s Excellence Award for Outstanding Achievement in Quality Improvement for his work with the Falls Risk Management Collaborative (2017) and the President’s Award for Outstanding Achievement in Innovation and Research Excellence for contributions to the Fracture Liaison Service (2018). Last year he also received an O’Brien Institute for Public Health Research Excellence Award.

Dr. Hogan has committed his professional life to geriatric medicine and to improving the quality of care provided to older Albertans and Canadians. In almost every major Canadian initiative related to aging, dementia and geriatric medicine, he has been a vital contributor and leader.