Zohaib Siddiqi is a second-year medical student at the University of Alberta. Before entering medical school, Zohaib completed a bachelor’s and a master’s degree in neuroscience at the U of A. In 2017, he was elected as an AMA representative for the medical students, and in 2018 he was appointed as an AMA board observer. Alongside the Calgary representative, Zohaib led the first joint AMA/CMA Advocacy Symposium, attended by leaders from both organizations.

As an AMA representative, Zohaib has been a voting delegate at AMA Representative Forums and at the 2018 CMA Annual General Meeting.

His other roles include leading the Public Health and Critical Care Interest Groups and organizing the yearly World Health Organization simulations for the first-year medical students. Zohaib is also a CMA ambassador and has attended CMA forums that aim to tackle physician burnout and improve wellness. 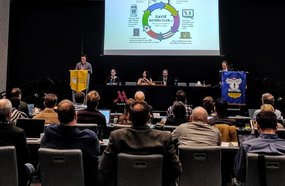 U of A and U of C advocacy symposiums

U of A and U of C advocacy symposiums