Airdrie doctor speaks for those who have been silenced

Growing up in Pakistan, Dr. Fozia Alvi, an Airdrie-based family physician, was keenly aware of the hardships created by limited access to medical care. “It was a very poor country and where we lived there was not much in the way of care.” She watched her only brother struggle with schizophrenia and saw how devastating it was for her entire family. “I knew then that I would go into medicine and that I would work to help those most in need.”

Dr. Alvi has made good on that promise throughout her medical career, with frequent trips to third-world countries. On one of many projects, Dr. Alvi and her husband “spent time in Kenya, in an area so remote there were no roads, helping to build a school for girls.”

In recent years, Dr. Alvi has spearheaded several initiatives, including the building of a women and children’s hospital in Talagang, Pakistan. “Infant mortality in Punjab is amongst the highest in the world, and pregnant women in the region had almost no access to medical care – there was nothing for hundreds of miles. We originally set out to build a small maternal care unit, and it grew from there to become a 60-bed hospital with a neonatal intensive care unit.”

Opened in December 2017, Iman Hospital has already had a dramatic impact on the lives of people in the community, with more than 20,000 patients treated and over 450 babies born in the first year. Dr. Alvi returns annually to work alongside the physicians at the hospital and to discuss their needs. In the coming years, she hopes to add a trauma centre and expand the scope of specialties available at the hospital.

Making it easy to volunteer

Dr. Alvi reports that many of her colleagues back home in Canada were also interested in becoming involved. “I’ve heard from many physicians who are willing to donate their time, but who can’t be away from their practices for extended periods. So I decided to create an organization that mirrors the work of Doctors Without Borders, but on a smaller scale, that requires a shorter time commitment.” Her organization, Humanity Auxilium, focuses on medical, educational and relief efforts.

“Where is the outrage?” The plight of Rohingya refugees

In addition to Iman Hospital, Humanity Auxilium has been instrumental in providing aid and drawing attention to the heart-wrenching plight of the Rohingya refugees, forced to flee Myanmar to settle in refugee camps in Bangladesh. It’s a humanitarian crisis that has galvanized Dr. Alvi. “I first began providing medical relief to the Rohingya refugees in the fall of 2017,” she recalls. “I was horrified by what I saw. There were so many unaccompanied children and people that were completely traumatized. There was a hopelessness there that I had never seen before.”

Dr. Alvi worked in the camps for weeks, helping malnourished refugees dealing with the horrific aftermath of rape, torture and beatings, and living in squalor with contagious diseases, including tuberculosis. “This is genocide; there’s no other way to describe it,” she states.

In an impassioned and eye-opening interview (Rohingya Crisis: Where is the outrage?) with Tina Brown, former editor of Vanity Fair and The New Yorker, Dr. Alvi provides a touchingly personal overview of the horrific Rohingya refugee crisis. And with this widely-shared Facebook video, she reiterates her plea to Canadians to “do something about it!” 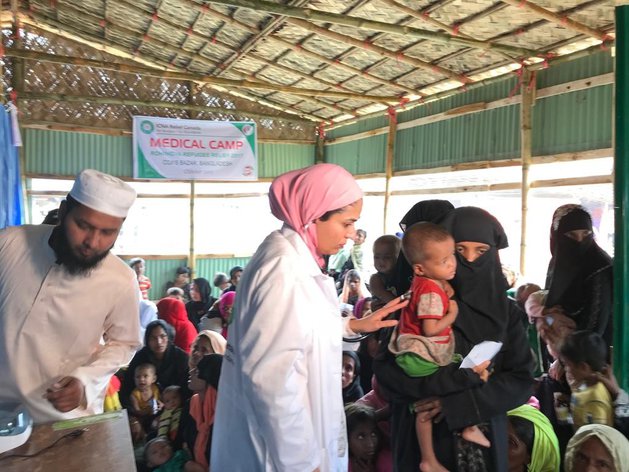 “There was a hopelessness there that I had never seen before.”

The challenge of returning to our Canadian blessings

When Dr. Alvi, a mother of three, returned to Canada, she found sleep evaded her, riddled as she was with guilt at the comfort of her own and her family’s lives. She realized she had PTSD and, for everyone’s sake, she needed to do something about it.

“I made the decision to channel that emotion into something constructive,” said Dr. Alvi, who became an impassioned advocate for the Rohingya people, writing for the Globe and Mail and making countless presentations, including to the United Nations in New York.

Dr. Alvi met with Prime Minister Justin Trudeau and asked him to declare the Rohingya refugee crisis a genocide. She also requested that Canada revoke the honorary citizenship of Aung San Suu Kyi, the State Counsellor of Myanmar. The Canadian government did both. 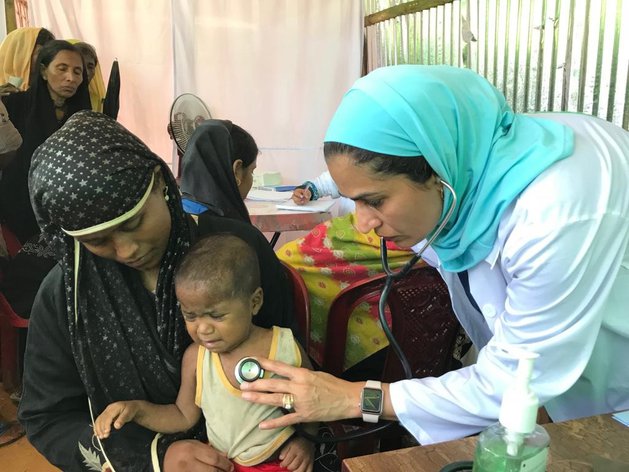 “I made the decision to channel that emotion into something constructive.”

So much more to be done

Dr. Alvi stresses that there is still much more to be done to raise awareness of the genocide and the desperate needs of the Rohingya people. As part of that effort, she worked closely with documentary filmmakers* to show the conditions in the camps, and she continues to present and fundraise in an effort to obtain support for medical relief. Although it’s an exhausting schedule, Dr. Alvi is grateful for the chance to play a part in alleviating the unimaginable suffering she witnessed.

“This kind of work brings us out of our comfort zone. It helps us give the best of ourselves to the people who need us the most; it’s a true gift. We’re planting the seeds of hope for the future.”

On May 21, 2019, the Airdrie Rotary Club hosted a fundraiser for Dr. Alvi’s foundation (Humanity Auxilium). That same evening, the Rotary recognized Dr. Alvi’s extensive humanitarian work on behalf of women and children in Pakistan, the Rohingyan refugees, and numerous other altruistic global undertakings, with the Paul Harris Fellow.

“The real honor for me,” says Dr. Alvi, “is their commitment to support my doctors’ teams and possibly full sponsorship of their travel to refugee camps for the next two years. I was in awe.”

* The eight to 10-minute short documentary is scheduled for release in summer/fall 2019. Filmed in August 2018, the documentary details the journey of Dr. Alvi as she travels to Bangladesh to respond to one of the largest humanitarian crises in the world.