Well, nothing can throw a real wrench into several hundred Alberta school’s plans for their spring/summer AMA Youth Run Club season quite like a big ole’ pandemic!

If you could hear a heavy, unanimous sigh of disappointment all around Alberta in May, that was coming from the close to 500 schools in the province that we were anticipating would register clubs and plan YRC races and events this spring season.

However, it takes more than a pandemic to stop the AMA Youth Run Club! By the end of May, the YRC had “gone virtual” with an array of online resources to facilitate home-based physical activities for both families/households and schools.

For the girls: The École Maurice-Lavallée YRC

This is the story of one YRC that has kept itself running and flourishing through the pandemic. And raising funds for the Edmonton Food Bank, while they’re at it! Under the caring and skilled guidance of dedicated teacher Sonia Breton, Edmonton’s École Maurice-Lavallée club grew from its pre-pandemic core of around 25 members – to the 45 female and male students, and staff who participated in their first virtual race, May 30.

“It was awesome!” exclaims Sonia, referring to the minimum five-kilometer run/walk/bike race that got off to its official, flag-down start at 11 a.m. 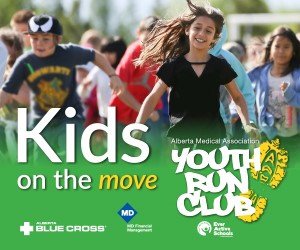 A languages teacher (English, French and Spanish) at the high school, Sonia is no stranger to coordinating a run club. Unaware of the AMA Youth Run Club two years ago, when she first got involved with the girl’s run club, the club’s 10-week training format was based on the LOVE YOU program by Shoppers Drug Mart™).

Motivated by memories of her own youth as a teenager who wanted to stay physically active but wasn’t drawn to competitive or team sports, Sonia wanted to provide the physical activity opportunity and outlet that she had lacked as a teenager, to her school’s female students.

“I wanted to offer something non-competitive, that anyone could be part of; get some exercise and feel good!”

It was a chat with a fellow teacher and friend in Calgary that prompted Sonia to find out more about the AMA Youth Run Club.

“She told me of all the benefits of the AMA Youth Run Club,” says Sonia. “How easy it was to register and all the great, convenient resources … everything you need to get a club up and running quickly.”

The girls were also keen for a club format that facilitated running and exercise for more than 10 weeks of the school year. While the YRC for high school students looks different than it does for elementary students – after running outdoors from September to November, the girls coordinated their own exercise programs for the remainder of the winter, in and around the demands of studies, part-time jobs, etc. – the resources and support are there for all, when needed.

“Toward the end of February we started the run club up again,” says Sonia. “We met twice weekly, early in the a.m. and again during flex time, and we’d go out and run. We were just getting back into it! And then …” Enter the pandemic.

After a couple of weeks of COVID-19 home isolation, one of the girls reached out to Sonia, to ask if the club could keep meeting, virtually.

“The benefits of the club aren’t just about exercising and staying physically healthy,” explains Sonia. “It’s about the mental benefits too. Especially during the pandemic.”

Sonia arranged Google meets for her and the girls and they started running again, COVID-style. While that was working fairly well, Sonia was thrilled to learn of the YRC’s virtual program. With several options to choose from – AMA YRC@home; the Climbing Everest Challenge; YouTube playlists: a Training Log; and Virtual Fun Runs – there’s an exercise option to fit everyone.

Sonia and most of her students found what they needed. Fourteen of the 25 girls decided to do it online – to keep training and virtually meeting, to keep everyone on-track and motivating each other.” Sonia met with smaller groups of girls, four times a week, “checking on them, to make sure they’re doing okay.” Not just with the running, but with the pandemic in general.

On April 25, 14 girls participated in the club’s first virtual race. “It was awesome!!” declares Sonia. “It was so emotional …” They met online at noon (Google meets), right before the race, so they could say hi and cheer each other on.

From the meetings, it was clear to Sonia that keeping the club together through the pandemic was as much about mental health, as it was about staying in shape. “Yes, it was very good to keep everyone active,” she says, “But it was also very important to look after our mental health, too.”

The success of that run prompted Sonia and her club to grow their offerings and on May 1, after promoting the virtual run to the whole school, they began their virtual, cross-Canada run/walk/bike race – from BC to Newfoundland – with 48 participants. Through a Google classroom and an online form students would track their progress/activity, with everyone’s kilometers contributing to the overall distance from Victoria to St. John’s.

As part of the run, the group started a GoFundMe page on behalf of the Edmonton Food Bank. To date, they have raised $2,300, surpassing their goal of $2,000.

Not wanting to stop there, Sonia and her expanded run club had a five-kilometer race May 30 that drew 45 participants. Complete with race bibs (which the kids LOVED, says Sonia: “They felt like they were actually participating in a race!”) and the guidance of the Virtual Run Guide, the race was a success, with participants sharing photos and enthusing about the motivation they got from the run club to stay active, set goals and stay in touch.

“You could tell that day, that everyone was really happy to be there,” says Sonia. “It gave them a chance to share and support each other.”

Staying connected, together and active

“The students were really committed to staying connected, together and active,” says Sonia. And while not comparable to physically running with someone, it was the next best thing.

“We talked about it; everyone agreed – take your phone. Connect your ear buds, so that you’re ‘walking with each other’ even though you aren’t physically together,” Sonia adds. “The connection was the important thing; to stay connected, together and active.”

Based on her club’s positive experience with the AMA Youth Run Club’s virtual running program, Sonia says, “For sure, in the fall, we’ll get onboard officially with the YRC. If we have to keep doing it virtually, we will.”

Since it began in 2013, with 4,000 kids and 77 schools, the AMA Youth Run Club has been steadily growing in participant numbers and expanding its program offerings. The impressive growth of this school-based, inclusive health and physical activity initiative would not be possible without the support of generous program sponsors:Alberta Blue Cross (gold); MD Financial Management (silver); and in-kind sponsors: Canadian Tire Jumpstart and Fast Trax Run & Ski Shop.