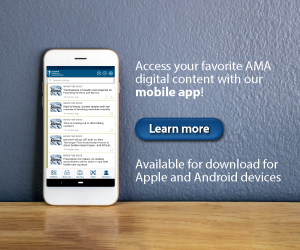 Acrophobia: diagnosis of acrophobia requires an intense, persistent irrational fear of heights (greatly out of proportion to an appropriate level of fear) accompanied by avoidance behaviour and anticipatory anxiety which significantly limits a person’s everyday life.

- Definition modified from Cleveland Clinic website, based on Diagnostic and Statistical Manual of Mental Disorders (DSM-5)

Burnt-out with crises in emergency rooms and family medicine? Angered by the anachronistic, despicable, paranoid Putin-led Russian invasion of Ukraine? Worried about care deficits, inflation, cost of living and vast amounts of governmental debt? Frustrated by political incompetence and disinformation? Try the bracing effect of a day in Alberta’s Columbia Icefields – a grand Canadian development to be proud of, and still invigorating even if you can dance a Highland Fling on a thin girder extending out from the equivalent of the top floor of a 50-story skyscraper.

Some 5% of the population are afflicted with the “Real McKay.” But at least 30% or more (including me) have some degree of “acro-anxiety.” Just as the definition of alcoholism is hard to differentiate from “heavy drinking,” a key diagnostic criterion for acrophobia is a significant interference with your everyday activities.

So what? Well, a favourite cousin from the UK and her daughter from Phoenix came to visit in early June. We needed a break from Ukraine and the “denazification” BS, the coronavirus plague and conspiracy BS, the stock market corrections and the health care crises. The usual tour of visits was planned, you know – Sulphur Mountain, Banff Springs Hotel, Lake Louise, etc.

The Royal Tyrell Museum was also on the agenda, and after the lengthy drive to Drumheller on Saturday, June 4, we were dismayed to find it full – no tickets available. Hordes of loyal monarchists had reserved free tickets given out to celebrate Queen Elizabeth’s Platinum Jubilee. Nobody told me! Why didn’t I check the website? Never occurred to me; it’s a museum! You can always visit the Tyrell at the weekend! But not today, loser.

We then tooled off to the Atlas Mine Museum where our grandfather, a mining engineer, spent three months in 1909 consulting on the best site for setting up the mine. We inspected old photos of the miners sorting through the precious coal on rail carts and chucking out useless dinosaur femurs, teeth and vertebrae. We missed the tour of the slope mine halfway up the mountain where the coal seam about 4-5 feet in height stretches nearly 5 kilometres and 2.5 kilometres through the mountain range. Tant pis! 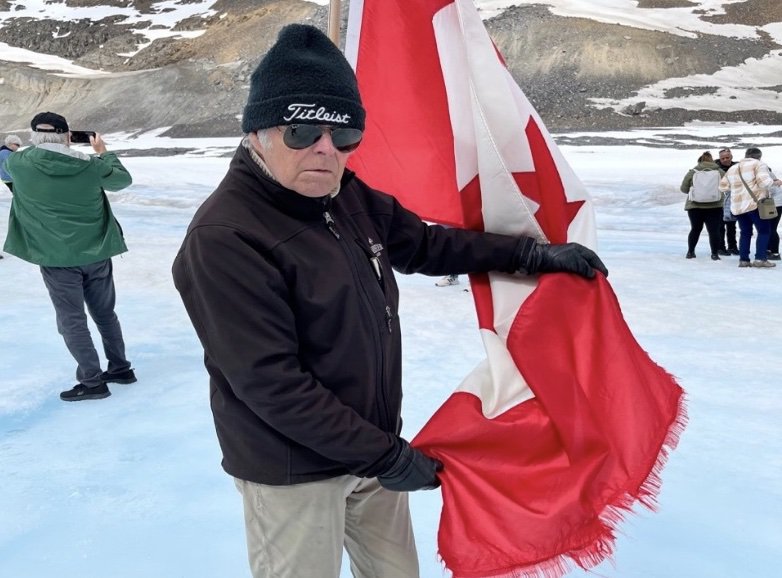 So I booked tickets for the Columbia Icefield Adventure with the Pursuit Company on the Monday for a bus drive up to the Athabasca Glacier and a stroll on the new (opened in 2014) glass-sided and -bottomed Skyway platform ($270.90 for three tickets). We set off from Calgary at 6:45 a.m. in the rain for the Columbia Icefield Glacier Discovery Centre on Highway 93 for the 11:15 kick-off.

We filed onto a blue bus that set off promptly with the driver giving a rapid and largely incomprehensible talk, pointing out a variety of things. Driving up a narrow gravel road beside the Athabasca Glacier, we reached the exchange point and transferred to a red bus with massive tires – yes, the same kind of behemoth that was in the news in April 2020 following a deadly 50-metre ice slide and tumble down a moraine ending on its back. These buses now have seatbelts. The case is still sub judice.

Our new driver climbed aboard and introduced himself as Ryan from Nova Scotia. With some relief, we saw he was an amiable, sober, ruddy faced, intelligent young man who spoke clearly and amusingly, informing us of his four years  experience driving these mechanical leviathans.

Then the usual guide question: “Where y’all from?”

“Oic, Oic, Oic,” came the expected reply from the back of the bus.

After carefully – no, fastidiously – fastening seatbelts, we were off, Ryan pointing out two glaciers to the left side of the Athabasca Glacier: the Andromeda Glacier and the A2 Glacier. The bus went comfortably at the speed of a harvesting farm tractor. Ryan told us that the Athabasca Glacier expanded till around 1840 and after that has receded steadily. I didn’t know glaciers expanded after the last Ice Age … ever – but they did.

“At this rate, the Athabasca Glacier will be gone in 80 years,” said Ryan.

Somebody asked what the difference was between icefields and glaciers.

“The Columbia Icefield is a composite term comprising at least six different glaciers,” said our guide. Wow! The guide’s correct use of the word “comprise” told us we had a well-educated person driving.

We ground slowly down the snow road, then up and onto the middle of the glacier. “Watch your step – there are ice-holes.”

We plodded over the packed snow, ice and slush, side-stepping puddles of ice-melt towards a cutely tattered Canadian flag planted in the snow. At the flag, the usual photos were taken. After 30 minutes glacier scrunching, we returned to the red bus.

“Anybody drink the glacier melt?” says Ryan. “Yeah,” from some voices.

“Sorree, should’ve warned you …” Some gasps and consternation. “Just kiddin’ – as long as you didn’t drink any of the yellow stuff.”

Back at the exchange, we boarded another blue bus to take us to the Skywalk with me starting to feel a tinge of anxiety. The new driver whose name I missed explained the solidity of the platform structure. They’d never lost anybody. But with mild to moderate acro-anxiety that’s not really the point – the reaction is completely irrational. You know there’s no real risk unless you deliberately climb over the side. Hundreds, no, thousands of people have traversed the Skywalk. Like many other neuroses, your logical, rational brain desperately tries to control the rebellious anxiety pathways. Maybe there’s a mad killer waiting there to wrestle you over the side and down into the Columbia Valley 1,000 feet below – a ten-second fall? Maybe a rumble of an earthquake in the mountainside will loosen the anchors?

“We’re passing the ‘shooting gallery’ now,” says the driver. Hundreds of huge chunks of rock lie on the grassy field beside the roadway. These regularly tumble down the mountainside and sometimes reach the road and hit vehicles. There was a tragedy on Highway 1 near Golden, BC in March this year when a rock crashed onto a passing Jeep. We all watch the mountainside.

We disembark and walk along to the kiosk entrance in beautiful sunshine, no wind, get our tickets scanned and we’re in. There are several stalls – a young woman showing a variety of wildlife footprints – the bear’s massive print easy to remember. Another stall of fecal scat – the bear’s scat is voluminous like bent German sausages; the deer’s is a pile of pellets. Another demo stall on climate change – maybe an appropriate post-political job for Steven Guilbeault, Minister of Climate Change and climate activist who scaled the exterior of the Toronto CN Tower. Where is he when we need him? He could do a daily demo climb on the cliff face here.

The Skywalk looms up along the walled path which itself is hanging over the mountainside. A little more anxiety bubbles up even without the see-through glass bottom. At the entrance to the dreaded glass loop, a uniformed woman explains the engineering feat – the three layers of bullet-proof glass, the huge anchor pins, and the weight and wind dampers.

“The metal looks rusty, but it’s a special metal that doesn’t rust.” Oh, yeah? They have to keep painting Scotland’s Forth Bridge to prevent rust.

A rubber mat to shake the snow off our shoes so we don’t slip, and we’re off. Cousin Jenny also has a mild case of acrophobia. She steps off first. You see, I need her to do that so that I can help if she has a problem. I grasp the inside railing. Don’t look down. Cousin J is in front of me. “Just keep going Jenny. Don’t stop.”

We pass normal people taking photos and selfies, leaning backwards over the outer railing to get a wider scan. I glance down through the glass to the valley bottom a thousand feet below. “Excuse me,” I bark at another normal person in my way who is nonchalantly leaning on the inner railing. And round we go. And reach solid ground. Cousin Mo, a normal person, has been strolling back and forth taking photos of us neurotics (but then she’s had experience – she’s been on the Arizona Grand Canyon Skywalk.)

“Why don’t you go round again for desensitization?” she says, but I’m thinking not to push luck too far and decline, though later I regret it. It would have been therapeutic to stroll round multiple times. But I fear by now this foible is sclerosed solid into the brain and is incurable. 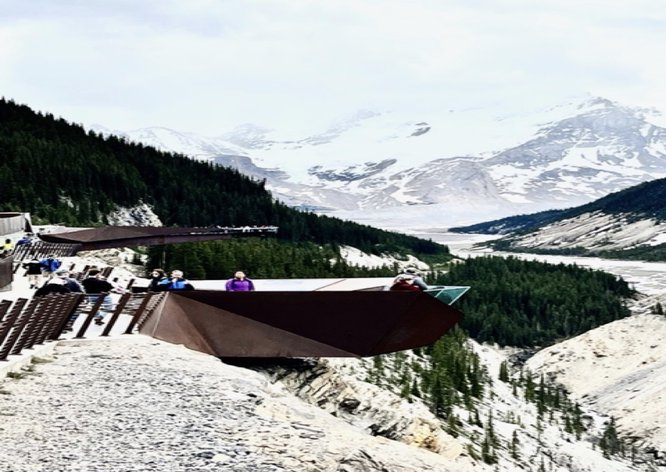 The original idea was a Parks Canada challenge for a proposal and business plan (along the lines of the Grand Canyon Skywalk) and was taken up by the Brewster Company and aided by many other local and international companies. A design team assembled by PCL Construction Management was recruited, headed by Calgary architect Jeremy Sturgess. PCL chose the engineering firm Read Jones Cristoffersen (RJC) led by Simon Brown, who has experience with mountain projects.

The platform is based on the cantilever principle: a structural framework anchored at one end but free at the other allowing the structure to extend beyond its fixed point, and overhang without supportive brackets.

Rust-resistant Corten Steel was chosen, oxidized to a rust-coloured yet extra-strong steel, unlike the previously mentioned Forth Bridge.

The platform’s U-shaped horseshoe design was modified to extend one of the arms to skew the platform to the best overall view. A cross-bridge was added for further structural support. No supports are visible above or below the projecting platform, but steel cables ring round the platform for structural compression and tension, which can be fine-tuned if required. The platform was assembled in the parking lot and slung into place by a 318-ton crane.

This Skywalk was built over two seasons between July and October, with engineers testing the load and compressive strength of the rock. The glass walkway and sidewalls are made of three sheets of bullet-proof glass adhered together and assembled by hand on the walkway.

The drop is nearly a thousand feet down to the Sunwapta Valley, and the Skywalk extends 115 feet from the edge of the cliff. Thirty-four high-strength steel rods were drilled a comforting (to me) 52.5 feet into the cliff’s rock, anchoring the foundation blocks to the bedrock. Four black-box vibration sensors dampen the effect of wind buffeting or of a 100-kilogram human tempted to perform a jumping-on-the-spot exercise routine. All this is laid out in Glacier Skywalk, a nicely designed book with stunning photos by Clea Sturgess, Trevor Boddy and Jeremy Sturgess (published by C&C Offset Printing Co. Ltd.), available at the bookshop for $24.95.

We get into the blue bus again for the return to the centre. “Make sure you see my favourite waterfall, the ‘Weeping Wall,’” says the young enthusiastic driver. “And tell my boss you enjoyed my recommendations.” The relaxation on the bus was palpable, and the feeling of the experience was super exhilarating.

In the interest of balance, lest anyone suspect I may have received a brown envelope from Brewster for this panegyric – the Discovery Centre app was useless (or was on the day we were there, and it still doesn’t work back in Calgary.)

But make no mistake – this attraction is the kind of terrific provincial and national project this country badly needs to rebuild some battered national pride of the last few years. It’s a government and private business initiative that we can all be proud of.

Many of you may have been there already but if you haven’t … go. I’m ready to go again. It was indeed a great antidote for burnout.