Motivating change through education and sharing

After the Truth and Reconciliation Commission of Canada released its 2015 report addressing the history and legacy of residential schools in Canada, the AMA formed a working group to examine the seven health-related Calls to Action included in the report and to identify ways that the AMA could support education and change.

“We call on all levels of government to:

(i) Increase the number of Indigenous professionals working in the health care field. 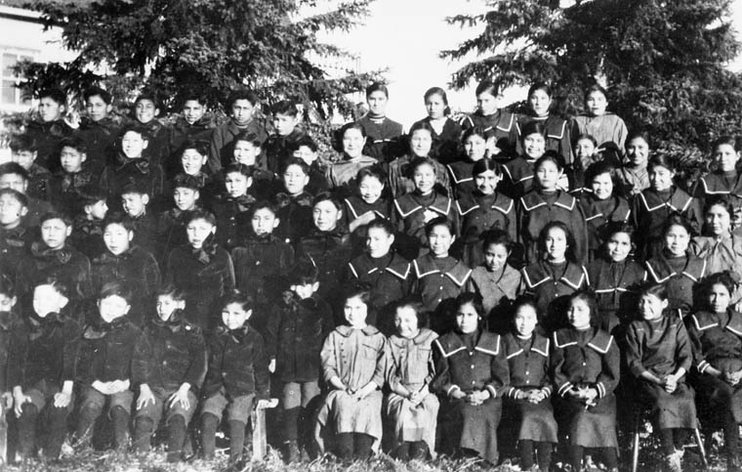 In this thought-provoking and emotional all-day cultural safety training session, led by Brenda Reynolds,* an Indigenous Cultural Consultant of Saulteaux heritage, AMA staff were shocked and dismayed to learn of the “aggressive assimilation policy” and “cultural genocide” that resulted in Indian residential schools in Canada. In addition to educating staff on the historical facts of Indian residential schools, Ms Reynolds helped staff understand the demeaning and negligent Indigenous experience of Indian hospitals and the subsequent consequences on Indigenous health.

The opening of minds and hearts to the lessons and learnings of the day began with a smudging ceremony and prayer offered by co-facilitator, Mrs. Phyllis Mustus,** a member of the Alexis Nakota Sioux Nation, accompanied by acknowledgment of our presence on Treaty land.

Describing the training, Ms Reynolds said, “The objective (was) to recognize and increase knowledge, enhance self-awareness and examine any perceived biases and stereotypes of Indigenous people, while promoting positive relationships between service providers and Indigenous people.”

The training included viewing of the May Productions video, In the Walls of His Mind, featuring residential school survivor Stephen Kakfwi – former Chief of the Dene Nation, premier of NWT and tireless worker for his community – as he described his predominantly horrifying experiences in residential school, and its pernicious effect on him. Playing in the background through the video is the touching song, “In the walls and halls of your mind,” written by Stephen.

In an especially poignant excerpt from video, Stephen said: “My parents didn’t raise me. I was basically gone just about all of my life. I came back when I was 18 … You become a stranger to your own land; to your own community; to your own family … Many Canadians don’t know. They think, ‘Why are these Aboriginal people always complaining? Why are they always on skid row? Why are they always drinking?’ We have to make amends … We deserve to be happy. We should be able to enjoy the sun and the beautiful things around us without being caught all the time in the anger and the darkness and the horrible things that we went through as kids in residential school …”

In addition to providing staff with a sobering overview of the tragic, multi-generational legacy of Indian residential schools, Ms Reynolds and Mrs. Mustus educated AMA staff about the history of Indian Hospitals, describing the effect and influence that the Canadian government’s assimilation and colonialism policies had, and continues to have, on the social determinants of health for Canada’s Indigenous peoples.

In the walls of his mind from Mayproductions on Vimeo.

Related video: In the Walls of His Mind, featuring residential school survivor Stephen Kakfwi – former Chief of the Dene Nation, Premier of NWT and tireless worker for his community

Concluding with a Sharing Circle, participants reflected on the day and considered how the knowledge they gathered would affect and change their lives, perceptions, beliefs and behaviors. Following are staff comments from a post-training survey:

“I will continue to pray for world peace and that humankind learns we are all one; that we can embrace any differences we have and that we can share them.”

“Challenge my own assumptions and biases …”

“Pay more attention to my own biases – consider changing some of my opinions.”

“I will speak up about what I learned today.”

“It has changed my attitude toward Indigenous Peoples.”

“Canada has issues; it’s my responsibility to make a difference.”

“Right now, the committee is doing a scan to determine what is currently available in terms of Indigenous cultural training,” says Dr. Mittelsteadt. “Once we get an understanding of our options and develop a plan, we’ll communicate with members.”

Planning is also currently underway to provide Indigenous Cultural Safety Training to the remainder of staff who have yet to take the training, and the remaining members of the AMA Board of Directors and Senior Management Team, who haven’t yet been able to participate in a training session.

Brenda was the 1992 Social Worker of the Year in Alberta, presented by the Alberta Foster Parent Association. The award recognizes commitment to the child from a professional and community practice perspective.

In addition to her extensive consulting work, training and numerous speaking engagements, Brenda is an avid distance runner, having successfully completed 24 marathons, including the Boston Marathon.

"The most glaring blemish on the Canadian historic record relates to our treatment of the First Nations that lived here at the time of colonization," Chief Justice McLachlin said. She was delivering the fourth annual Pluralism Lecture of the Global Centre for Pluralism, founded in 2006 by the Aga Khan, spiritual leader of Ismaili Muslims, and the federal government.

After an initial period of inter-reliance and equality, she said Canada developed an "ethos of exclusion and cultural annihilation.”

"Let us understand that what happened at the residential schools was the use of education for cultural genocide, and that the fact of the matter is – yes it was. Call a spade a spade," Martin said to cheers from the audience at the Montreal hearings.

As part of their Diverse Populations online program, Alberta Health Services offers a course – Understanding Diversity: Online Training – for health care providers. Per the description, “This online course looks at providing patient-centred care to Alberta’s socially and culturally diverse population that may impact access, health and well-being of individuals and their families.”

In addition to the online course, Diverse Populations includes a list of Indigenous health- and culture-related resources, along with several other Indigenous (and newcomer) reference sources (Strategies and Frameworks; Tools; Nutrition; and Research). AHS is developing other Indigenous-focused educational tools/programs for both AHS- and non-AHS health care providers.