Music is a universal communicant

“Music hath charms to soothe the savage breast, to soften rocks or bend a knotted oak.”

“O my Love is like the melody that’s sweetly played in tune.”

As Putin and his siloviki continue to plumb the depths of paranoid depravity, language – spoken or written – has limits. A thoughtful choice of words, avoidance of stale metaphors and cliches, and a clear idea of what we want to convey are what most strive for. But there comes a point when words falter and they can’t express exactly what it is you want to say. And it’s there that music – singing or playing an instrument – takes over, blossoming the emotional flower you couldn’t bring forth with words.

Music is a universal communicant – understood by all mankind and maybe beyond (chickens produce more eggs and cows more milk when exposed to music). Mozart is said to have claimed that “the music is not in the notes but in the silence between the notes.” Sorry, Wolfgang, you’re better at music than words. Of course, it’s the notes and the silence between them in combination with the skills of the musicians, the delivery, quality, timbre, pitch, rhythm, volume, and the ineffable overall effect that produce an emotion – a mood within the setting. Settings can be personal, yet connected to others and fitting to the occasion – a child singing solo, a piper on the castle wall at dusk, a choir or an orchestra in sweet harmony, a band finding its groove.

But not always. Justin Trudeau sings Queen’s Bohemian Rhapsody leaning on the hotel lobby piano two days before the late Queen’s funeral. Not a huge deal but maybe a bit out of place. Not as neat as his father’s pirouette at Buckingham Palace, but Pierre would never have done that two days before a state funeral.

A summation of JT’s political philosophy? At least it wasn’t the Beatles rendition of “You Make me Dizzy, Miss Lizzie.” 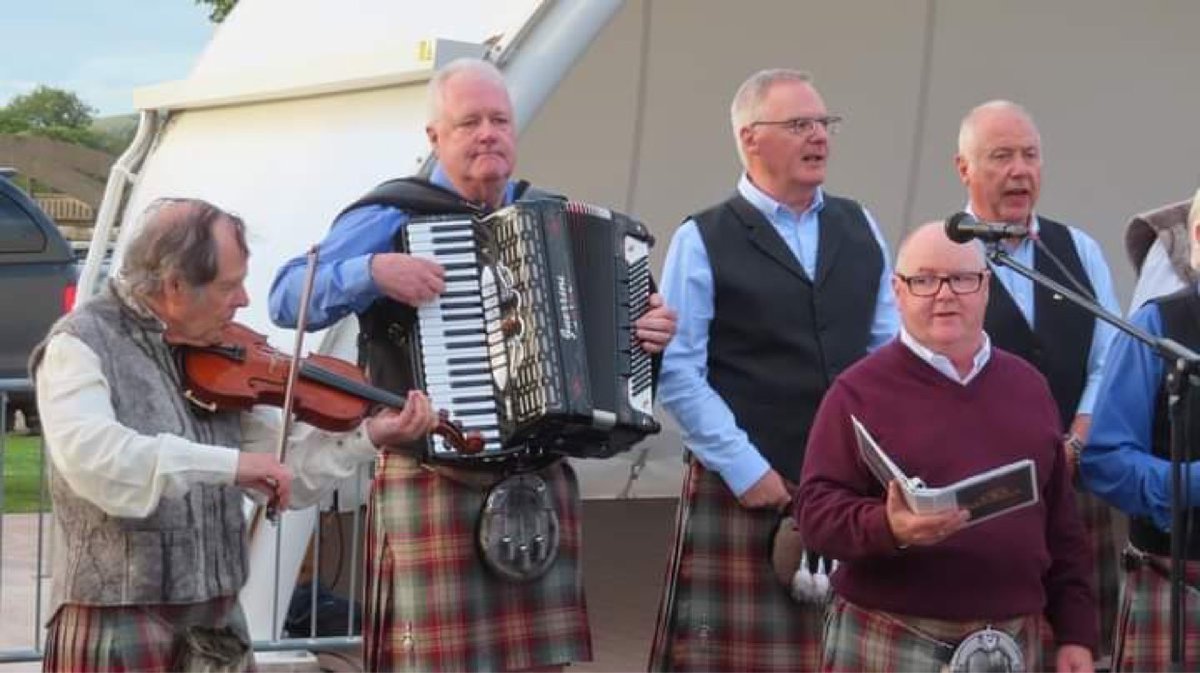 The music played at the late queen’s funeral filled the emotional void of the crowds and produced comfort. There’s no doubt that the notes (the sharps and flats, crotchets, quavers and semi-quavers) and the right key to clothe the music (whether folk, ballad, rock, reggae, classical, jazz or pop expertly executed by orchestra, band, crowd or solo) can produce a rise in blood neurotransmitter levels in performers and listeners. Listen to a Welsh crowd singing Glan Rhondda at an international rugby match in Cardiff Arms Park to feel the spine-tingling joy in the crowd (and the shadow of fear and doubt elicited in the opposing side, be they Scots, English, Canadian or New Zealand players). The strains of a piper playing Blue Bonnets over the Border sent men scrambling out of trenches yelling and suppressing fear, rushing towards a chance of death. And in the extreme, as Woody Allen confessed: “I can’t listen to any more Wagner … I’m starting to get the urge to conquer Poland.”

And recall watching a silent movie or a silent video clip. Something’s missing. It’s empty, tedious. The sense of sight alone rarely conveys emotional depths. Cinemas in the days of silent movies and even in the early days of talkies hired piano players to plonk away at the side of the screen to fill the emotional void. Hospitals in the Philippines (and occasionally here) have piano players playing in the entrance lobbies and waiting areas to cheer patients and their families. Music therapy is now well established as an important aid in healing. Dementia wards and homes usually have music playing, and the poor souls in their innocent purgatory of lost memory often remember snatches of verses sung when younger and fully cerebral.

Singing and music are enjoyable and therapeutic – and maybe more than that, according to Judith Oakley et al. of Edinburgh University and the Reid School of Music, whose research was reported in The Economist (Sept. 9, 2022). Back in 1947, all Scots schoolchildren aged 11 had IQ testing. Over a thousand participants still alive at age 82 were contacted, and a consenting sub-group had repeat IQ testing between 2004 and 2007, with stratifications for region, social criteria and life opportunities. This research suggested that singing or learning a musical instrument when young leads to durable positive changes in general cognitive ability – although you could say it wasn’t a controlled study and self-selection to singing or learning a musical instrument may put you in a privileged group with a tendency to better general cognitive abilities.

Let me indulge a minute longer. My own undistinguished musical career of catgut scraping and singing began with Miss Dorothy Mackintosh, a violin teacher who seemed old at the time but was probably middle-aged. She taught the string section of the school orchestra. She was enthusiastic, sometimes so much that spittle would collect in the corners of her mouth. She taught the Brussels Conservatoire Technique for 30 minutes each week. The BCT is a scapula- and gleno-humeral-joint-stretching, neck-aching contortion whereby the left humerus and elbow is brought anteriorly and medially, which allows the arched fingers of the left hand to be positioned vertically over the strings precisely dropping over the string with the tips of the fingers as you launch into The Vicar of Bray.

I never rose higher than second desk of the second violins. It was only on leaving school that I realized you could stuff the BCT and hold the fiddle comfortably with the left elbow flapping at the side like a duck. This allowed freedom from pain and in my later medical school years led to playing in a folk/blues group around the pubs and clubs in Edinburgh – and getting paid! And with free drinks sent over for enjoying yourself! Life seemed easy and good. On one heady occasion I stood in for Clive P, with a band that few have heard of now (The Incredible String Band). I was not asked back.

Working in Edmonton at the Cross Cancer Institute in the 80’s, we had a fine band of minstrel friends. In the line-up was TK Lee (former AMA President, internist, guitar/vocals); Derald Oldring (ENT surgeon, trumpet); John Boyd (obstetrician/gynecologist, double bass); Don Bouie (colorectal surgeon, piano/keyboard); the late Norman Davies (cardiologist, drums); and me (oncologist, vocals/guitar/fiddle.) We also had appearances from then-medical students Sid Viner (intensivist, medical administrator, drums) and Doug Strilchuk (family doctor, alto sax). We played mainly at medical dances but had a few gigs at other venues. I do recall the excitement when we gelled as a band and hit the groove – that exhilarating moment of realizing you’re really playing together. The audience picks up on that and then the dancing really starts.

So in late August this year, a different group of elderly performers, singers, musicians and supporters accepted an invitation received before the pandemic to tour southwest Scotland to perform at tattoos, theatres, clubs and – uninvited – in the occasional pub. As expected with a group of mainly septuagenarians, medical problems arose. Jet lag and sleep problems, memory slowness, forgetfulness, anxiety, insect bites and upper respiratory tract infections (including COVID) were encountered and treated.

Travel problems were harder. Some checked bags with essential garb were delayed. Packing for travel was a worry. Some became neurotic about it: what to put in the roller bag for stowing in the aircraft’s overhead compartments, what to risk checking in and potentially contributing to the massive pile of orphaned luggage in Heathrow Airport. Most loaded into the overhead bag the essential gear (kilt, jackets, sporrans, dress shoes, dress shirt, stockings, medications, toiletries and a rolled umbrella.) Non-essential stuff for Scotland like sunblock, gifts, sandals, changes of underpants, socks and shirts went into a checked bag that might not be seen again. In the end, only two of us temporarily lost bags – the president lost his kilt and highland regalia, which arrived in the nick of time before our first performance.

We congregated in Dumfries via Glasgow or Edinburgh, where garbage had collected in the streets with the dustmen’s strike. Dumfries, proud home of the Dumfries and Galloway Royal Infirmary and the town’s first hospital (opened in 1776), was the site in December 1846 of the first use of ether in Europe as a surgical anesthetic – two months after its first use in Massachusetts General in October 1846. It's also the town where the poet Robert Burns died. But it is now struggling, industry having left a decade ago. Scores of charity shops and dozens of empty Turkish, Kurdish and Scots barber shops – with no visible clientele – are likely now fronting other more profitable activities.

Sharing decent rooms in the Cairndale Hotel in central Dumfries is not what most touring groups might do but The Famous Calgary Burns Club Singers (as we were billed) have not yet reached the level of world renown that one can indulge in single rooms and limousine fleets, although expenses were partly covered by our hosts and the buses were comfortable.

It may have surprised some local observers looking forward to a performance by the Famous CBC Singers to see a bus unload a baker’s dozen or more stooped, arthritic, greying, wrinkled, coughing, old dudes dressed in kilts and Prince Charlie jackets (named for the rebellious Charlie from 270 years ago, not recent King Charlie) and white cowboy hats staggering into Kirkcudbright’s Masonic Arms to fortify themselves before hobbling along behind the Cameronians Pipe Band and a troupe of young Highland dancers. Please note this is not a “choir.” No, these are singers ranging from divas to modest chantiers to warblers. Choirs are disciplined, do complex harmonies, behave themselves and expect to be listened to. These “singers” tolerate minimal discipline, encourage spontaneous outbursts of artistic behaviour and do not expect to be listened to in silence. They aim to take the focus off themselves (even when one falls off the stage) and prefer to have the crowd do the singing. In this, they are successful.

And do not allow me to mislead – this band of brothers, this happy few – are no neophytes, having performed at the mighty Edinburgh Military Tattoo to great applause in 2009. If the crowd is not rocking to us belting out The Battle of Killiecrankie then few will be standing without tapping their feet and clapping in time to Farewell to Nova Scotia. It’s a simple, effective formula to set hearts racing and faces grinning.

We played to crowds ranging from a few thousand in Kirkcudbright to a hundred in the Wellwood Theatre in Irvine to a few dozen in churches, church halls and the occasional pub – all the time received with enthusiasm, kindness and hospitality.

In Irvine (where Robert Burns lived for four years learning the flax trade), we performed in the Wellwood Theatre to a full audience at an outside temperature of around 32 degrees Celsius; a stuffy theatre with minimal ventilation and performers and audience singing lustily was a classical super-spreader event – and inevitably a couple of the group developed symptoms two to three days later and tested positive for the coronavirus. Fellow singer Paul, a surgeon, observed that it appeared that those of us who had been vaccinated and boosted but also had had a previous clinical case of the omicron variant of the virus avoided detectable infection.

Our pre-recorded music accompaniment sometimes failed, and we were left singing a cappella (which Jim called “Acapulco”), and in a tug-of-war challenge in Kirkcudbright we were unexpectedly defeated by a team of school children.

But it was all fun thanks to melodies sweetly played in tune. And lovely to get away for a bit from the dark global realities closing in on us all.