Dr. Cara Bablitz is a Métis woman, raised in the Treaty 8 Territory, from the Cardinal/Laboucane families.

She currently resides on Treaty 6 territory in Edmonton, Alberta. Dr. Bablitz attended medical school at the University of Alberta and trained as a family physician in Chilliwack, BC. She practiced as a rural locum after completing residency and then returned to Edmonton to complete her specialization in palliative care. Her practice is based out of the Indigenous Wellness Clinic at the Royal Alexandra Hospital. She developed the Palliative Care Outreach and Advocacy Team (PCOAT) to provide primary palliative care to patients who are vulnerable due to poverty as well as the historical legacy of colonization and residential schools.

Dr. Bablitz was instrumental in creating the AMA Policy Paper on Indigenous Health and has been the Chair of the AMA Indigenous Health Committee since 2017. She is the 2018 Canadian Medical Association (CMA) Award for Young Leaders (Early Career) recipient, and the 2016 Canadian Society of Palliative Care Physicians (CSPCP) Research Award winner wherein she was voted as the top Resident Research Project in Canada at the CSPCP Annual Conference. 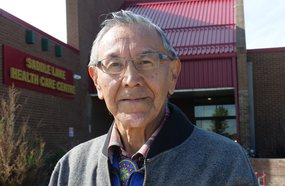