Born in Brampton, Ontario in 1877, John Stewart came to Edmonton in 1896 when he was 19-years-old. After attending normal school, he taught at Namao. Following an apprenticeship with Dr. A. H. Goodwin, DDS, he entered Trinity Dental School in Toronto. His training was interrupted in December 1899, when he joined the Lord Strathcona Horse in Edmonton, then under Lieutenant-Colonel Sam Steele. He saw a year of action in South Africa (1900-01), earning a Queen’s medal with four clasps.

After returning to Canada, Stewart completed his DDS with honors in 1902 and moved to Lethbridge to join Dr. William McClure, his future brother-in-law, as a full-time dentist. 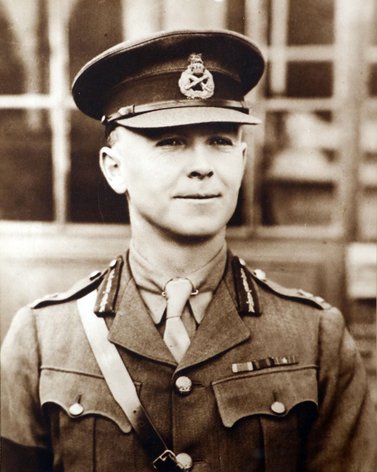 In 1907, the CO of Military District 13, the same Colonel Sam Steele, visited Lethbridge’s Liberal Senator, Dr. George deVeber on a recruitment mission. They asked Dr. Stewart to form the 25th Artillery Battery. It was the first battery in the west, but it required him to complete his major’s certificate at the Royal Military College of Canada, which he did in February 1908. In 1909, he was appointed to the board of the new University of Alberta, before entering politics by successfully running as a Conservative MLA from 1911 to 1925.

With the outbreak of WWI on August 4, 1914, Major Stewart was asked to form and command the 20th Artillery Battery. The 20th was one of four artillery batteries raised from Lethbridge: the 20th, 39th, 61st and 78th. Each battery normally had four to six guns. Four batteries made a brigade of about 1,100 men. There were up to 10 brigades attached to a division.

Dr. Stewart closed his practice after he was promoted to Lieutenant-Colonel and appointed the CO of the 7th Brigade. He headed to Camp Shilo for training before going overseas on August 9, 1915.  Further training at Shorncliffe included target practice and coordinated artillery and infantry attacks. Shooting was limited by equipment shortages and a ration of 12 rounds per day.

The brigade’s guns ranged from 3” to 18” howitzers or 18 to 800 pounds per shell. The “heavies” were those 12” and over. They were managed separately by General McNaughton. Trench mortar guns were also given to each brigade to lob smoke shells. Other shells were filled with toxic chemicals. The guns were usually located 1,000 to 2,000 yards behind the lines. They were used to destroy opposition batteries, prevent counter attacks, impede German troop movements, shoot down airplanes, and offensively support infantry advances, raids and rescues.

To improve accuracy during advances, a forward observation officer (FOO) was usually embedded with the infantry. He was responsible to communicate gun landings back to headquarters (HQ) over buried or surface telephone lines. Accuracy was affected by distance, elevation differences, winds and the temperature. Consecutive shells could land up to 25 feet apart. Poor ammunition could explode early. Accusations of “short shelling” on their own troops were not uncommon, but on investigation were usually found to be German in origin.

As the war became a stalemate, Stewart’s brigade was ordered to France to join the 2nd Division. Stewart began writing a near-daily diary, together with frequent letters to his wife Jean. His candid comments and occasional opinions revealed him to be well prepared, thoughtful, a keen observer, a loyal officer, and a team player who exuded a quiet confidence and rarely indulged in alcohol.

Seeing the carnage around him, Stewart became a fatalist, placing his “trust in God to make the right decisions or protect him.” Later he expressed his own feelings as those in Psalm 91. “He will call upon me and I will answer him… and bring him honor.” One call was to research Lethbridge colleagues to determine the truth about their injuries or deaths and write home to their families. Another was to write his Conservative colleague R.B. Bennett that “easterners get the soft jobs; westerners, who are the bulk of the troops, get the hardest jobs.”

On his first (of six) leaves to London in May 1916, he took advantage of the break to meet friends, attend plays, get sized for a new suit and visit doctors. Lieutenant-Colonel Frank Mewburn and Captain Richard Shillington from Lethbridge were stationed at the Connaught Hospital at Taplow. He noted how the Lethbridge Imperial Order Daughters of the Empire and Red Cross had donated some of their 500 cots.

Back in France on July 1, Dr. Stewart coordinated an artillery-infantry raid so precise that two German prisoners were secured for interrogation in 10 minutes. On July 30, his unit performed the first dangerous daylight rescue of a captain injured in a raid, using an artillery barrage as cover. A forced leave came from October 28 to February 6, 1917. He and another officer were hit while touring their batteries. After arranging for the removal of his injured colleague, Dr. Stewart was stretchered out. At the dressing station, his “hot-iron like” injuries to his right arm, right leg and back left no imbedded shrapnel but required debridement and suturing under ether. While away recovering, he was mentioned in dispatches and was honored with a Distinguished Service Order from the king. 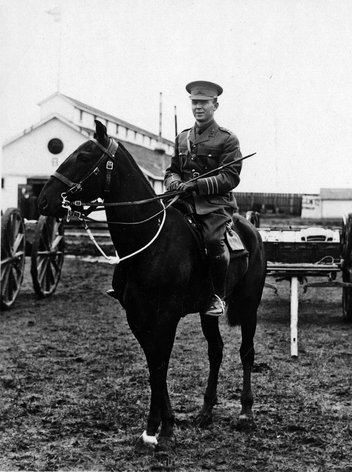 Stewart’s return to action was shortly before April’s Battle of Vimy Ridge. In preparation, the Canadian artillery and infantry were integrated. Appointed the CO of the 4th artillery brigade in the 1st Division, he carefully followed the 35 pages of General Morrison’s instructions, and participated in the trial barrages (April 3) and trial bombardments (April 6) before the attack began at 5:30 a.m. on April 9. By then, 983 Canadian guns were facing 212 German guns.

The battle opened with one million rounds of shelling. Triangulation had pinpointed the German guns. Eighty-three percent of them were knocked out immediately. The infantry attack followed the artillery rolling barrage which advanced 100 yards every four minutes. So effective was the advance, some of the infantry reached their objectives by 8:45 a.m. and all did by noon.

Stewart’s leadership qualities had come to the attention of his superiors early in the war. They led to his double promotion from a lieutenant colonel to a brigadier general on July 7, 1917, initially as the temporary CO of the 4th Division Artillery. There were seven brigades under him. The promotion was made permanent in October, just before Passchendaele. In December, he was transferred permanently to the 3rd Division. His new position he found much less stressful.

Another acknowledgement came February 21, 1918, when Stewart was invited for dinner with Division Commander General Lypsett, who was entertaining Winston Churchill and the Duke of Westminster. Churchill quite impressed Stewart.

In July 1918, Stewart was sitting in a chair in his HQ compound when a shell hit 20 feet away. It bruised his back and was “like being hit by a baseball.” The bruising was extensive, but the skin remained intact. No leave was required.

The last 100 days began on August 7 with the Battle of Amiens. The Canadians were alongside the Australians. Backed by 400 tanks, they penetrated five miles the first day, securing 3,000 prisoners and 162 guns. Ludendorff called it the blackest day in the history of the German army. Stewart was awarded a Croix de Guerre from the French a week later.

Stewart’s last battle was at Mons, Belgium on the night of November 10/11th. Mons had been the site of the first major battle in WWI. It was also where my grandfather ended his WWI overseas tour of duty, and my father began his in WWII.

With Ludendorff’s resignation on October 29 and the Kaiser’s abdication on November 9, an armistice was signed effective 11 a.m. on November 11. The Mons victory parade that day was led by General Stewart, who ordered the “general salute” in front of General Officer Commanding Sir Arthur Currie and the King of Belgium.

General Stewart was awarded one of six Canadian artillery military honors by the king on January 3, 1919. He returned to Canada early, on January 19, in time for the legislative sitting. Despite his wishes for anonymity, many veterans turned out to greet him when he arrived on the 3 a.m. train from Medicine Hat.

Dr. Stewart ran federally as a Conservative in 1925 and was defeated, but was elected for one term as a Member of Parliament in 1930. He continued his dental practice for over 58 years until retiring in 1960 at age 83. The General Stewart School (kindergarten to Grade 6) was named after him in 1957 and in the same year, U of A Chancellor Dr. Earle Scarlett presented him with an honorary law degree.

On the 50th anniversary of the liberation of Mons in 1968, Dr. Stewart returned to Belgium and received the “Citoyen d’Honneur,” to go along with his WWI Victory Medal, King George and Queen Mary Medal, and Efficiency Decoration. Dr. Stewart died in 1970 at age 93.