Pandemic has changed the way we help marginalized communities

Addressing the suffering of Rohingya refugees

For Calgary’s Dr. Fozia Alvi, founder of the non-profit organization Humanity Auxilium, the COVID-19 pandemic challenged everything she thought about helping others around the world.

A family physician, Alvi has travelled to Rohingya refugee camps in Bangladesh since 2017, providing health assessments and treatment to thousands of ill and malnourished people surviving in squalid conditions. Alvi and several medical colleagues had been planning another mission to the camps in March 2020; however, COVID-19 brought that plan to a grinding halt and further jeopardized the already precarious health of the refugees.

“I felt terrible and thought to myself that I still had to do something. I'm not going to sit here and watch their demise quietly,” Alvi says.

Although limited in what she could do, Alvi knew she had to help. She also knew her friends, family, volunteers and local partners in Bangladesh would support her every step of the way.

“Our COVID-19 outreach teams in Rohingya refugee camps have been working hard on the ground the past few months to mitigate the spread of the virus and to offer support to those who are sick and struggling." - Dr. Fozia Alvi, Calgary (photo credit: Humanity Auxilium)

Supporting refugees in a new way

Just months later, in June, the World Health Organization (WHO) confirmed about 2,500 COVID-19 infections in the Bangladeshi municipality of Cox’s Bazar, where the world’s largest refugee camp – sheltering nearly 900,000 Rohingya who fled violence and persecution in neighbouring Myanmar – were located. Another 50 refugees tested positive in other Rohingya camps. Alvi and Humanity Auxilium’s local partners knew that the number was likely much higher since there was little COVID-19 testing.

At first, Alvi and Humanity Auxilium’s medical chair, Dr. Mohsina Chaklader, explored the idea of building an isolation centre. But it quickly became clear that this project wouldn’t be effective. The Rohingya, one of the most persecuted minorities in the world, feared further oppression if diagnosed with COVID-19. As a result, few came forward for testing when they had symptoms.

“Since the Rohingya have been persecuted for generations, there is stigma and fear among the community; hence, the symptomatic patients were not forthcoming due the fear of being separated from their families and community,” Chaklader says.

Humanity Auxilium worked closely with Bora Tümer, head of the Turkish Red Crescent delegation in Bangladesh, which is one of the few NGOs still providing humanitarian aid to the refugees on the ground in Rohingya camps.

Tümer realized reluctant refugees would have to be visited in the privacy of their shelters and provided with support, such as medical supplies and education about the virus, including informing them of the need to isolate if they had COVID-19 symptoms.

Rohingya were “staying at home and not coming forward to seek medical care at facilities due to the numerous stigma around COVID-19,” says Tümer. “Similarly, people in the community are avoiding tests because of the fear of being isolated.”

Alvi and Chaklader developed training modules to be shared virtually with outreach teams on the ground. The teams would play a pivotal role in protecting refugees during the spread of COVID-19, identifying possible positive patients and educating the Rohingya community in their own language about how to mitigate the virus’s spread.

The refugees received a visit by outreach teams and had numerous checkups. The follow-up, under the supervision of medical staff, is a crucially important reason the project has been effective. It eliminated the need to visit formal health facilities. Nearly 10,000 patients have received follow up care by outreach teams to date. More than 1,000 awareness sessions had been undertaken in the camps.

“Our COVID-19 outreach teams in Rohingya refugee camps have been working hard on the ground the past few months to mitigate the spread of the virus and to offer support to those who are sick and struggling. I am so proud of Humanity Auxilium and Turkish Red Crescent for their dedication,” says Alvi. 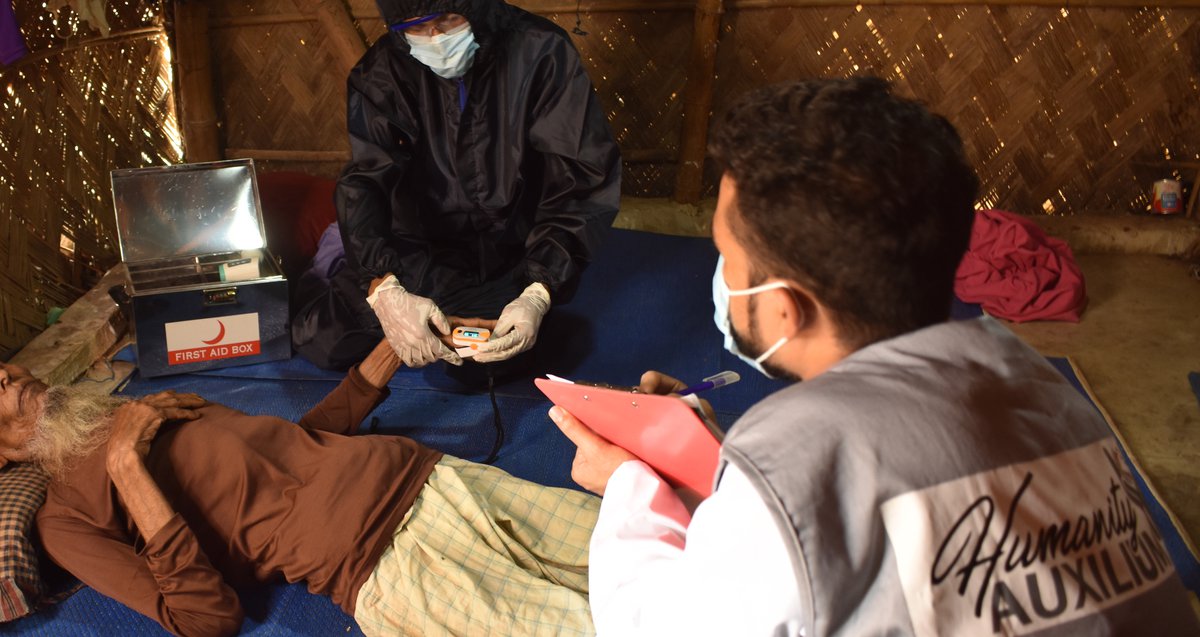 So far, nearly 25,000 people have benefitted from the project (photo credit: Humanity Auxilium)

Rebuilding trust in the Rohingya camps

This approach helped rebuild trust between the Rohingya and the medical community.

“We're reminded of the ever-changing nature of the health care system in these camps. We have recognized the importance of providing safe and effective medical care, screening and the positive effects of education and reliability for building trust,” says Alvi.

As of April 30, teams visited more than 59,960 structures and homes. So far, over 26,000 people – all likely COVID-19 infected, as teams are only treating patients with symptoms – have benefitted from the project. “Our project’s medical staff stood by the side of these frightened people through medical relief and kept them safe with a unique follow-up system,” says Tümer.

Chaklader adds, “The frontline local health care workers and the Rohingya families were very appreciative of our efforts as they felt that they were not forgotten in the midst of a pandemic.”

Providing relief to those who weren’t seeking it

One patient, Aziz (not his real name), has been living with several physical disabilities in Camp 17 for the past three years. He has a 68-year-old wife, a widowed daughter and a grandson living with him. “Even though we have many health care facilities here, we stopped going to health facilities after COVID-19 ... because we became afraid," Aziz says.

Aziz has a chronic cough, breathlessness and general weakness; suffers from gastritis and heartburn when eating meals; and has difficulty falling asleep. His wife also has long-term cough, headache, neck pain and difficulty sleeping.

Humanity Auxilium’s community-based surveillance and primary medical care team was able to reach Aziz while he was cooped up at home. When the teams first reached out, Aziz had a cough – a symptom of COVID-19. The community surveillance volunteers, along with medical staff, took him to the project coordination medical center, which is managed by the Turkish Red Crescent.

“When we were afraid of COVID-19, they visited from shelter to shelter to check us and informed us that we can go to the nearby Turkish Red Crescent health care center. We got medical care from there and got relieved from the disease,” Aziz says.

Although the COVID-19 outreach project has been successful in reaching needy refugees, ongoing medical care is still needed as the situation is constantly changing.

“Alarmingly, the situation of COVID-19 in Bangladesh has been deteriorating over the last few weeks,” Tümer noted on April 20, 2021. “The number of confirmed cases reached 23.36 per 100 tests in Bangladesh [and has] crossed the documented death toll of 100 for the first time – the upward trend has continued in the country since then. The positivity rate in Rohingya camps also suddenly increased from 1.3% to 2.3% in the last week. In addition, four of our colleagues working at the health facilities tested positive last week.”

The pandemic has added to worsening conditions in the camps in other ways. Alvi and her team are concerned about the impact on refugee women – many of whom are pregnant and afraid to seek medical attention or go to a birthing facility. In Cox’s Bazar, more than 26,000 Rohingya babies are born every year in refugee camps and informal settlements. Many Rohingya women are also victims of displacement, violence, trauma and, at times, rape. There is a growing concern about these women being stuck in the shelters with their abusers.

One pregnant woman, Noor (not her real name), lives in a small shelter in Camp 17 with four children and a husband. She became pregnant after positive cases of COVID-19 were first identified in the refugee camps. Like other pregnant women, Noor avoided health centers in case she ended up in an isolation facility.

“I became pregnant after the coronavirus arrived, but I could not go out of home because of fear,” Noor says. Even after becoming sick while pregnant, she did not seek medical care because of the stigma. “I was suffering from a cough, fever and headache, yet I did not go to any health facility,” Noor says.

The outreach teams from Humanity Auxilium's community-based surveillance and primary medical care project reached out to Noor. After checking her, they brought her to the project coordination health facility, where she was treated and given medication. Staff also encouraged her to have a hospital delivery.

Clearly, expectant mothers needed additional help, so Humanity Auxilium launched another project, mobilizing teams to inform refugees of their rights and options, such as birth control, along with nutritional and mental health support.

Alleviating further suffering: Stepping up when things get worse

Tragically, a massive fire this March in the Cox’s Bazar camp displaced at least 45,000 people and killed more than a dozen. Humanity Auxilium is responding to the fire by mobilizing to disperse funds, distribute food and provide medical attention to those injured in the blaze.

“We are standing in solidarity with Rohingya in this difficult time. Those people have suffered losses already: mass rape, razing of their homes, killings, forced displacement. They've lost everything in the past and now these temporary shelters are gone as well,” says Alvi, adding that Humanity Auxilium saw a spike in donations following the disaster.

In less than a week following the fire, more than 10,000 Rohingya refugees received care for burn-related injuries through Humanity Auxilium’s efforts. Humanity Auxilium distributed 62,301 hot meals, 3,308 cloth and hygiene packs and 21,070 medical support kits. “So many physicians who I didn't know personally reached out to me and offered their support. It means a lot to me,” Alvi says.

Although Humanity Auxilium has supported many people in the past year, much work is still to be done. “Humanity Auxilium is trying to provide medical relief, but all of these measures are just an effort to keep them alive and putting a Band-Aid on their wounds,” Alvi says.

Alvi envisions Humanity Auxilium taking a more global approach to help alleviate suffering and bring health care to those living in marginalized communities around the world. She hopes to add more volunteers and raise more money, leading to a bigger global impact.

Such involvement “… lets victims know someone cares, and that they are not forgotten. In the best-case scenario, you’ll have played a small role in mitigating a genocide, and in the worst case, you’ll have fulfilled a commitment to your fellow human beings. After all, as physicians, we are guided by the principle that each human life is precious and equal – even the ones far away from home,” says Alvi.